The comparison of the current image is done with:
* its instances (virtual copies).
* its variants exported in the current session and present in the current folder (according to the photo library).
* By default the raw image is targeted.

With the default option, “No correction (with geometry)“, geometric corrections, Lens corrections as well as Horizon and Perspective ViewPoint, are taken into account.
– Select the version in the version list
– Click / Release the “COMPARE” button (Ctrl+ D/ D)
– Click the button “COMPARE side by side” (Ctrl+ T/ C ) displays two windows
The current image is on the right, the other version is on the left

This arrangement, reading from right to left, is not ergonomic. 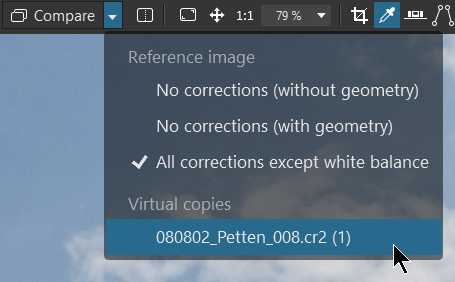 Access to the exported variant on disk is not possible if the file is written to a different folder (see chapter “Exporting photos”).

It is not possible to compare different images. DxO has promised to implement this much needed feature in the future.

When the comparison is requested during the correction activity using tools, such as WB and HSL droppers, repair masks and local adjustments, it is presented differently.
* The view button offers the “Split View” (Ctrl+ T / C), the window is divided into two. Double click on the slider to split it horizontally.
* When a tool is activated (*), the version (in the version list) changes to “(Compare with a version of) all current patches except this one”.


The comparison with a variant is not always interesting. Sometimes the user just wants to check the influence of a correction or a different value.

It would be appropriate, in a future release, to present a final rendering according to the color depth (sampling) and the considered color space.

PhotoLab’s Optical Modules only take into account photos recorded in raw format if the shooting characteristics have been analysed by DxO’s laboratory . All the available corrections are grouped under the term “Optical Module“. * Read more…

Take control of the interface

By default, PhotoLab’s interface takes up a large part of the image display area. You can recover some of that space.             It is not always necessary to display the Read more…

The corrections and palettes

SommaireThe palettesSmart palette PhotoLab is a parametric software, which means that the corrections applied are written as numerical instructions (*) and are not applied directly to an image. User edits are applied  during export according Read more…